Please note that shipments may be delayed due to COVID-19!
Home > Kitchen Stewardship eBook Bundle 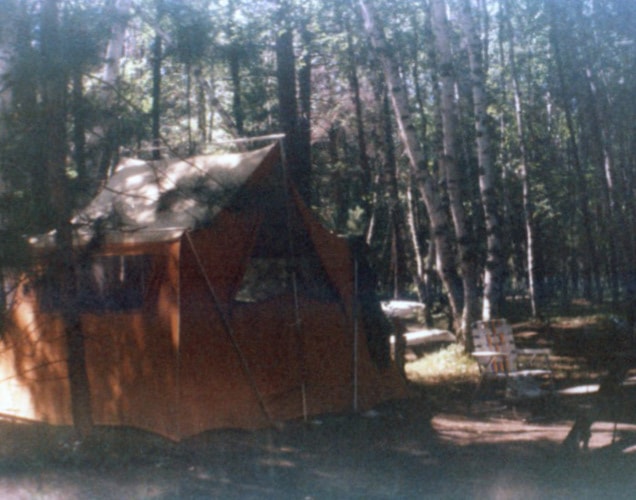 I grew up camping. My dad had an ancient canvas tent that took about two hours to construct and weighed 300 pounds. It had a few windows, but once they were zipped up, the internal atmosphere rivaled that of a sauna. It was old, and smelled kind of funny, but I loved that tent because it meant the great outdoors. It meant late nights in front of a campfire eating brats and s’mores. It meant days filled with swimming and fishing and burning to a crisp on the floating dock. It meant a different way of living for a few days that usually promised to be a good time.

We haven’t been camping much these last few years, mainly because neither E nor I had much of an idea of what to do with a baby in the great outdoors. What if he eats dirt (shock!)? What if he falls into a river? What if he crawls away and gets eaten by a bear? What if what if what if?

Despite our misgivings, we decided to bite the bullet last summer so we could give B some good childhood, family camping memories (because I’m sure he’ll always remember that one time he went camping when he was 23 months old :)). Because I had no idea what I was doing, I decided to buy the Family Camping Handbook by Katie Kimball of Kitchen Stewardship. I initially picked it up because she advertised good ideas for “real food” camping options, but this little ebook is actually full of tips to make family camping, especially family camping with littles, an easier and more enjoyable experience. She covers everything from where to source equipment and what type of equipment you need (including splurges), packing lists, and meal plans, to fire safety of all things. If you’re a novice camper or just wanting to get back into camping after having a kid and aren’t sure of where to start, I think this is a great little book to add to your collection.

This week, BundleoftheWeek.com is having a special sale of 5 of Katie Kimball’s books, including the Family Camping Handbook, for $7.40, plus a 50% off code for her newest ebook, Better Than A Box. This deal includes:

I already have all of these books from previous bundles, but I definitely have a few favorites. I’ve been making at least one version of the fake Larabar recipe (she offers several different flavors) in Healthy Snacks To Go quite often over the last few months (my current favorite is the German chocolate and B’s is the cocoshew). Smart Sweets has some fantastic recipes, including several gluten-free and grain-free options, without refined sweeteners. Better Than A Box, which isn’t included in this bundle but you do get a 50% off coupon for it (bringing it down to $7.48), has some great recipes for gluten-free and grain-free versions of classic recipes (including cream-of-whatever soup knockoffs). She even takes the time to lay out her exact steps for breaking down a classic recipe with questionable ingredients to make it more nourishing and “real food”-friendly.