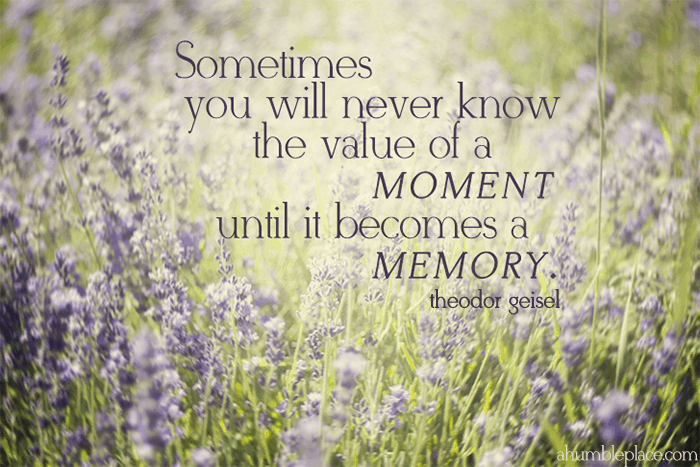 At times I feel like being a mother is a continual process of mourning. Even now, when C is still just six months old, I sometimes find it difficult to look through the pictures I’ve taken of her since she was born in January because she has changed so much. It’s like looking through an album and seeing faces that aren’t around anymore, even though I know it’s still her face. It’s still her. But babies change so dramatically and so quickly in the beginning and before I know it, the hair is a little bit longer, the gaze a little bit more “knowing,” and more clothes need to be retired because they don’t fit her anymore.

I went through this with B, too. As silly as it sounds, sometimes I have to stop myself from thinking about how quickly it’s going by because I just get so sad. I’ve been reminded of how I was constantly thinking that he was SO BIG, just because he was bigger than he used to be. And now I look at C and wonder how on earth I could’ve thought he was SO BIG when he was still a tiny baby. Yet I find myself doing the same thing with her.

We’re having some sleep issues with her lately that make the days and nights oh-so-long (or all-too-short, in some cases), but as I set her down on the bed last night for the umpteenth time to pull my hair back or just take a break from rocking her, she started to cry again and wiggled her way as best she could up my leg, reaching her hands up to me, wrinkling her little face up and squeezing the tears from her eyes. My mother heart broke a little and I scooped her up, inhaled her scent, and whispered in her ear that she is pure love.

The saying that babies don’t keep is so true. Before I know it, these moments will just be memories.