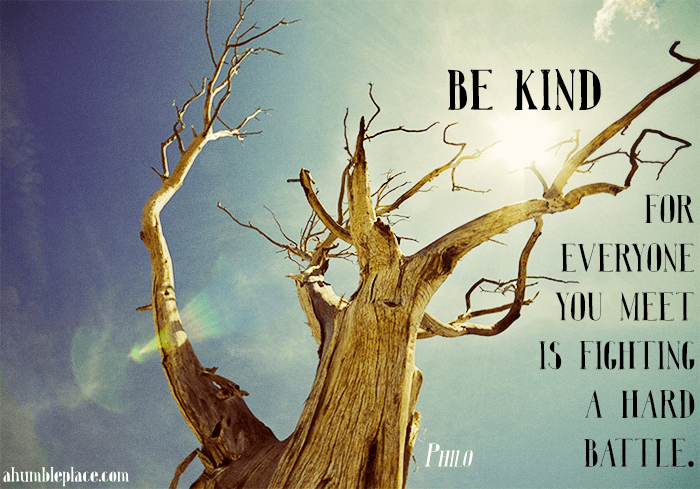 I took this photo a few years ago at Mesa Verde National Park when we took our first family vacation after B was born. I like trees. They all tell a story, and this one, being all dried up and dead yet frozen in its skyward reach, was no different. Reaching for the sun.

I chose it for this quote because sometimes it feels like life is just a battle. Constantly reaching for the sun or some seemingly unattainable goal, and draining yourself in the process. Some of us are good at hiding it, others…not so much. Regardless of what percentage of our hearts we wear on our sleeves, I can guarantee that most, if not all, of the people we cross paths with on a daily basis are fighting some kind of hard battle.

I see us, sometimes, as beings of many faces. We struggle with financial difficulties, sickness, marriage problems, mental illness, death, and the difficulty of being in certain seasons of life, not to mention the myriad other things that pop up while we draw breath. Things that everyone else experiences at some point in their lives, as well as challenges that some of us can’t even imagine. We fight through these things while we drive to work, go grocery shopping, or take the kids to the library.

Life is hard and we have no idea how hard it is for the person we pass by on the street.

I think what makes it harder still, though, is how we treat each other even while we’re wading through these difficult times. This was illustrated beautifully to me by someone I used to know at work. He came in late one day and told the story of a car that had been driving about five miles an hour under the speed limit on his way in that morning. He of course got stuck behind her and laid on the horn, tailgating her for about ten minutes of his fifteen-minute drive to work, gesticulating and yelling at her while he watched the time that he was supposed to arrive at work come and go. As he finally sped by to pass her, flashing a single finger in her general direction, he saw that she had three screaming kids in the backseat of the car and was staring out the windshield, white-knuckled, with tears running down her cheeks.

In his words, he felt like a total ass.

I wonder sometimes, if we kept in mind that life is hard for everyone (yes, everyone), if we carried around a little grace to hand out, if we bothered to take a break from navel-gazing long enough to notice the people struggling around us, that maybe we could lighten the load for someone else. That maybe we could help them a little in their battles and, by doing so, also help ourselves in our own battles as well.

Maybe choosing to be kind is half the battle.