Home > Beauty in Charlotte Mason Community: Part III
This post contains affiliate links and I may be compensated if you make a purchase after clicking on my links. Also, as an Amazon Associate, I earn from qualifying purchases through them as well. 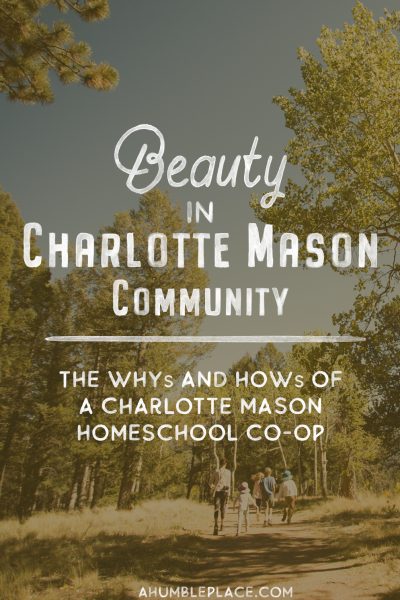 In my last two posts, I wrote about the why of being in a Charlotte Mason homeschool co-op followed by details on how ours operates. In today’s post and the next one, I’ll be walking through a typical co-op day and talk about what each subject looks like.

Prior to our co-op year starting, our leader comes up with a schedule for all of our subjects. I mentioned already that we split some subjects up by Form, so she takes this into consideration when she makes the schedule. We also have to account for the younger children and she makes a separate “Babyleben” schedule where one of the moms who is not teaching during a certain time period is available to watch them while their mom(s) teach.

For the first term of this year, our schedule has looked like this (upper Forms here refers to 4th grade and up):

We then break for lunch and those who have only students in the lower Forms (or under 6th grade in this case) can either stay for the afternoon to play with friends or head home. The afternoon then looks like this:

In setting down the schedule this way, she has attempted to make the subjects varied, eg. we come together first thing for morning meditation and hymn and sit, then we get up and move for PE, then sit again for picture/composer study, move again for snack time (which is usually a time for the kids to run around outside for a bit after they eat their snacks), sit for Shakespeare, moving for handicrafts, sit for picture/composer study, get outside again for nature study, and then all of us come together again for folk song. This has worked extremely well for us and the students have learned to move from subject to subject very efficiently for the most part. 🙂

To give you an idea of what each subject looks like, I’ll expand on them individually.

We meet for co-op day at 9 am approximately every other Friday during the school year. Our first “subject” together is a morning meditation by our leader and includes everyone – all moms and kids. She leads us in a time of reflection and devotion, usually reading a Bible passage and sometimes having one of the kids narrate. Then she prays for our time. This is a wonderful way to start our days as I find it centers me on our co-op time after the rush of trying to get out the door on time and the long drive. Then we’ll spend a little time “housekeeping” with announcements and rules for whatever house at which we’re meeting.

One mom is in charge of hymns for the school year and she picks six of them – with two per term – based on the time period we’re studying, which is the 19th century this year. I was asked to lead hymns, so I chose the following:

In the past, the mom in charge of hymns often taught about them as well, sometimes reading a biography related to the writer of the lyrics or music. This year, we decided to just sing them during co-op time without the longer biography, though I did read a tiny bit about each of the writers or songs we’ve had so far before we sang them. I also bring a little speaker and play a version for us to sing along to during co-op time. In the past, we’ve also had one of the moms accompany us on the piano. I’ll actually be handing this task off to another mom who was unable to be part of the co-op during the first term and she’ll be leading it for the rest of the school year.

The mom who is teaching folksongs and I put together a CD for the first term with instrumental and vocal versions of our hymns and folksongs, then gave one to each family to have at home so they can include it in their school time. These songs were either recorded by her husband or found on Freegal, which we provide a link to on our forum and ask every family to download so we all have a legal copy. In our home, we sing these during morning time each day with hymns on Mondays and Wednesdays and folksong on Tuesdays and Thursdays. As we stick with the same songs for six weeks, this gives us plenty of time to memorize them. 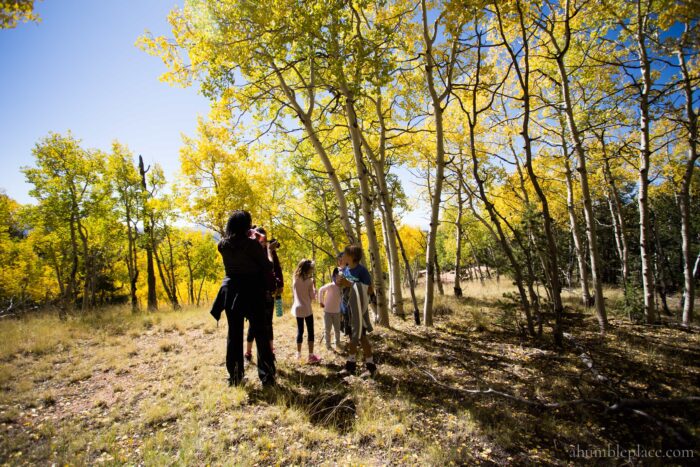 This is the first subject that is split with the younger Forms (grades 3 and below) working on Swedish Drill and the upper Forms (grades 4 and up) learning folk dancing (which they also did last year). Usually the older kids do folk dancing on the driveaway of whatever house we’re at as it’s the largest space available, and the younger kids will either find a larger area inside or go in the yard. Since we’ve been doing the “laying” positions in the last few weeks, our PE leader has chosen to stay inside.

Last year we had a bit of a hodge-podge of subjects for the younger Forms, starting with croquet and then trying easier folk dancing when the weather grew cold and we couldn’t go outside anymore. After that, we did random things like hopscotch and jump rope, then switched to calisthenics for a few weeks. When we started doing our planning this year and assigned teacher roles, I told the mom in charge of younger-Form PE about Swedish Drill. I let her look through my copy of the book as I had picked it up last year intending to implement it in our homeschool. I’m happy to report that it has been a HUGE success for us and the kids have responded extremely well to it!

The upper Forms have been learning various folk dances since last year including the Virgina Reel and Oh Susanna, and this year: Cumberland Squares; Oh, Johnny Oh; and a customized version of Sicilian Circle. They performed a few of these at our family nights in the fall and spring.

This is another subject that is split based on Form level. Originally, we had all of the kids together for these subjects but there wasn’t enough time for most of them to narrate and contribute to the discussion when we had all of the students in one room. Splitting them up has also worked well as we’ve been able to customize these topics to age-level-appropriate discussion.

For both topics, the mom assigned to lead will come up with a list of potential artists and composers based on the time period we’re studying and present it to the group. Other moms give their input, and then the mom assigned will come up with a final list of who we’ll be studying that term as well as the pieces/works we’ll be learning about. In term 1 this year, we’re studying John Constable and Ludwig van Beethoven.

We then determine how many picture study prints we’ll need for each family (one for every student and an optional [though highly recommended] copy for mom), then the mom assigned makes PDFs of all of the selections, and we order those along with any other printed things we need.

For the composer study, the mom assigned provides links on our forum to both a YouTube version and a Freegal version of each of the songs being studied so we can have them at home. I play the YouTube version during our composer study time at home (Tuesdays and Thursdays during morning time) and then add the Freegal MP3 to our Plex playlist so we can listen to it when we’re doing other things not during school time.

I taught lower-Form picture study last year and am teaching bother lower- and upper-Forms this year. We usually start with a short re-cap of who our artist is and what we looked at during the last co-op meeting. Then I hand out the new prints for the week and they look at them quietly for 3-5 minutes (sometimes 3 minutes is even a stretch, especially with the younger Forms). The kids then flip their prints over and narrate. This can be traditional narration, where I go around the room and ask each student what they observed in the piece; partner narration, where I give them one minute each to narrate to a partner; or a tradition the co-op started before I joined called Pageant of the Masters, where the kids “re-create” the paintings with their bodies. The last one is usually saved for pieces that have a lot of people in them and/or when we have more time. They also did one of these Pageants for our family night (with Rembrandt’s The Anatomy Lesson of Dr. Nicolaes Tulp) at the end of last school year. Then we have a time of discussion where we talk about the pieces more in-depth. I have found that 20 minutes is not very long when it comes to talking about art. 🙂

During composer study, the mom in charge recaps what they listened to during the last meeting, and then plays a new piece for them, either an MP3 version or a performed version on YouTube. The kids enjoy the latter, and in particular, last year when we were learning about Lully’s Cadmus et Hermione, they really liked the dragon. The kids then narrate what they hear and she’ll follow-up with more information on the piece or instruments used, or read from a biography about the composer.

We then break for snack time with each family bringing their own snacks. My kids usually scarf down their food and then run outside to play with the other kids while the moms stay inside to do some co-op housekeeping or catch up.

In my next post, I’ll go through the rest of the subjects, including the upper-Form sessions in the afternoon, and then wrap-up the series!