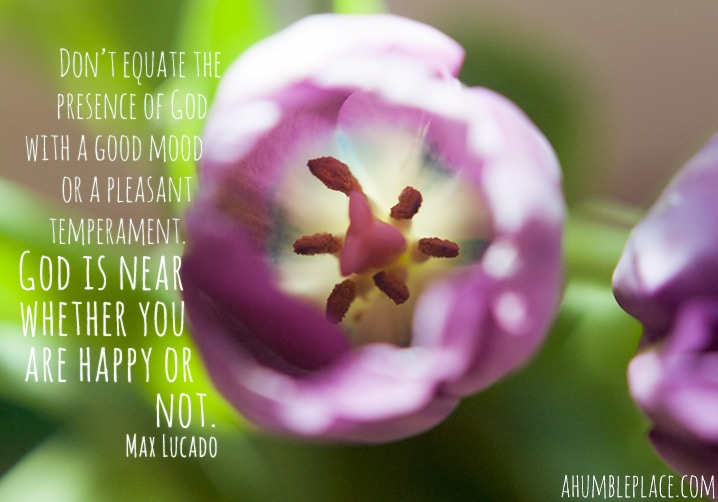 This is a phrase I have struggled with more than any other during my little Christian journey.

Sometimes it’s really just a matter of perspective. I grew up without a mom, but I’ve had the influence of many beautiful, older women in my life to help me along, women I probably never would’ve met had I been in a different situation, or at least not had the same relationship with. When my dad was laid off, we didn’t end up on the street or a shelter and though there were a lot of very tight times of living on saltines and Miracle Whip, we never starved. Moving so many times during my formidable years has made me want to fight all the harder to give B a steady and consistent childhood, a view I might not otherwise have if mine hadn’t been so unpredictable. My dad, his wife, and I have had a very rocky relationship over the last fourteen years, but I am very, very thankful that he has her…that they have each other. Yes, I was laid off twice in my early 20s, but both times I received very generous severance packages, and the first time I was employed again within a month. My fraud story is so much more mild than many I’ve heard in that I haven’t had to deal with collection agencies and have never been denied credit. And for B’s birth….my son is alive.

While I have struggled with God’s goodness, I can see that He has been good in my life. But am I even correct in that thinking? Do I really understand the definition of good when it comes to God? When I do research or answer questions about Love146, do I think God is good to those girls? When things like Columbine or Sandy Hook happen, is God good to those children, teachers, and their families? When I see pictures of children with swollen-but-empty bellies all over the world not having access to clean water or food, how is God being good in their lives? On a large-scale, all-encompassing view, what about the massacres of the Jews or Tutsis or Armenians or Muslims or Cambodians or Christians? Does God’s goodness not extend to them as well?

And, ultimately, what about Jesus? When He asked in the garden of Gethsemane, “Father, remove this cup from me,” was God’s goodness on vacation that day?

What I’ve wrestled with in all of this is that God’s goodness isn’t determined by the blessings He bestows. He is not an intergalactic genie Who is defined by how many wishes He allots us and is only good if He gives us what we want. God is good because He is good. It’s simply the definition of Who He is.

B and I have been reading The Jesus Storybook Bible before breakfast every day and one theme that keeps surfacing over and over again is that it wasn’t supposed to be this way. He gave us free will. Free will to love Him, free will to hurt others. And that same free will is what gives us the world we have today. He could interfere…He could have stopped the suffering of billions of people over the course of time without lifting a finger. But He also could have interfered in the garden of Gethsemane or made us all mindless puppets who couldn’t choose for ourselves, though we’d probably live in a pretty nice world.

So this is where we are. This is the world we live in. And God is good.