Home > Grand Canyon, Tumacácori, and Saguaro Junior Ranger Adventures
This post contains affiliate links and I may be compensated if you make a purchase after clicking on my links. Also, as an Amazon Associate, I earn from qualifying purchases through them as well. 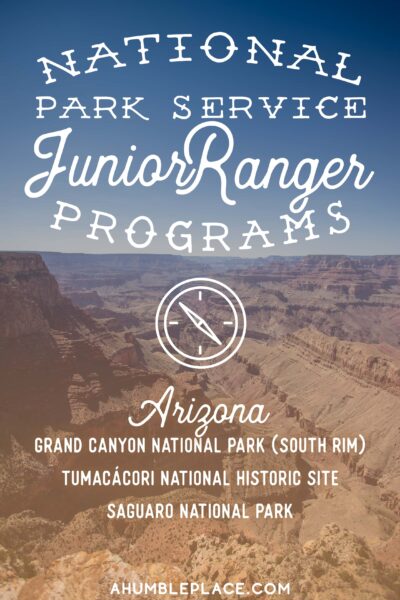 (You can see some of our other Junior Ranger adventures here.)

After a bit of a break from road trips and vacations and things along those lines for a few months, we decided to take advantage of the post-spring-break, pre-summer-vacation season to drive down to southern Arizona to visit E’s mom who winters there. On the way, we also were able to stop at a few National Parks to pick up a few more Junior Ranger badges for B’s collection (we’re up to 15 now)! 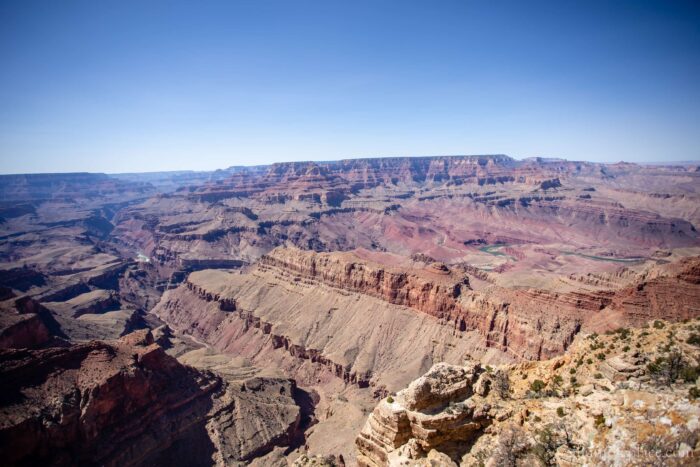 After a seven-hour drive across Colorado the day before and four-hour drive from Utah that morning, the Grand Canyon was the first National Park stop on our epic tour. Entrance fees as of the time of our visit were $30 for seven days (which you could easily spend there), but they also accept Annual National passes (you can also get them at your local REI) as well as the Every Kid in a Park passes (free for fourth graders!). There are two main parts of the park with separate entrances: the North Rim and the South Rim. The North Rim was closed at the time of year we went, but that one offers a separate JR badge and there is also a Phantom Rattler Junior Ranger patch that you can get if you hike or take a mule down to the Phantom Ranch on the floor of the canyon. Both of these will be musts for us in the future. 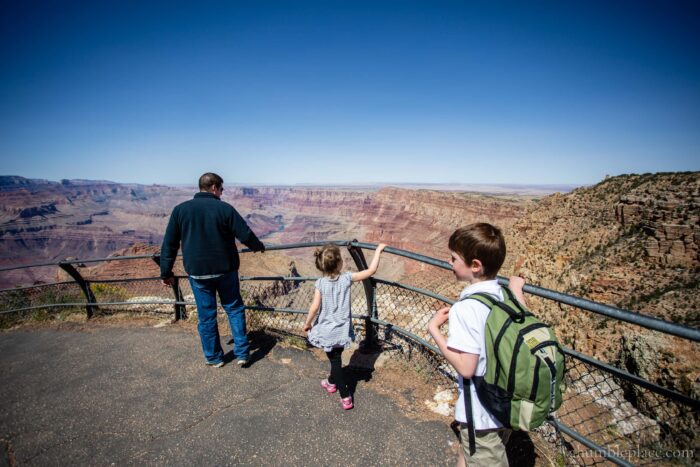 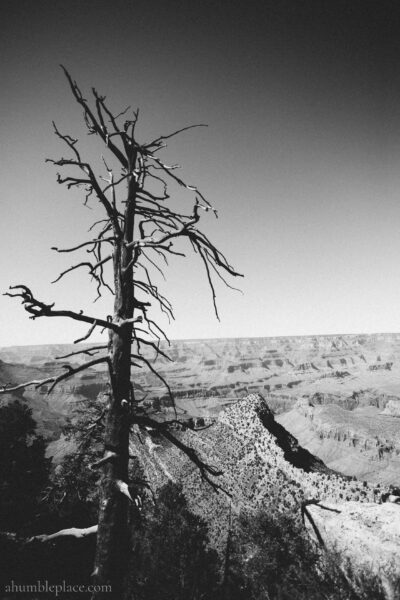 We arrived at the park in the early afternoon and our first stop was the Desert View Watchtower where we were able to pick up the South Rim Junior Ranger booklet. After a climb to the top of the tower and back down, we got lunch at the market and dug into the book.

The Grand Canyon South Rim Junior Ranger book is for ages 4 and up and includes 14 activities. The types of activities are broken down by age between 4- to 7-year-olds (5 activities), 8- to 10-year-olds, and 11 and up, with each group doing 4 activities of their choice. For B, we stuck to the 4- to 7-year-old group which included things like describing a structure we visited, bingo (which is a common one in the JR books), recording observations, drawing, and things along those lines. It’s a fairly easy and straight-forward book and we found the activities to be very age-appropriate. It also doesn’t require any special hikes. 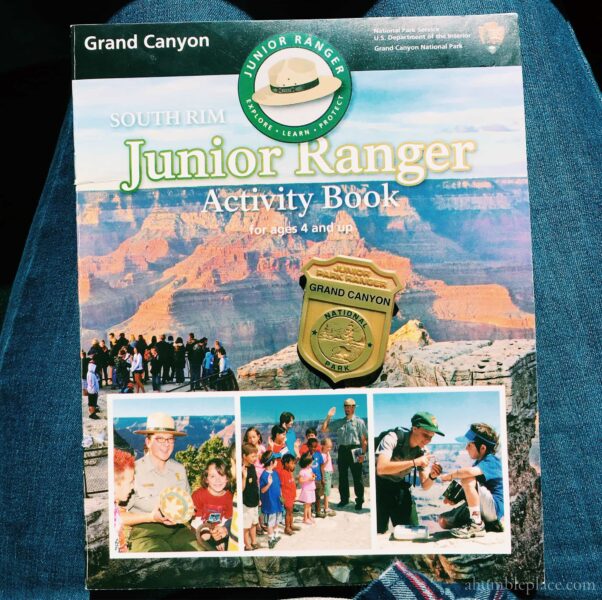 After completing the activities in the book, you do need to either watch the video offered at the visitor’s center (shown often throughout the day) or attend a ranger program. We were fortunate in that as we were making our way to the visitor’s center to watch the video, we happened to cross paths with a Ranger who was about to give a talk outside on birds in the canyon, which was just about 20 minutes long. She was a fantastic speaker and was very engaging with the kids, so this was a great addition to our day. 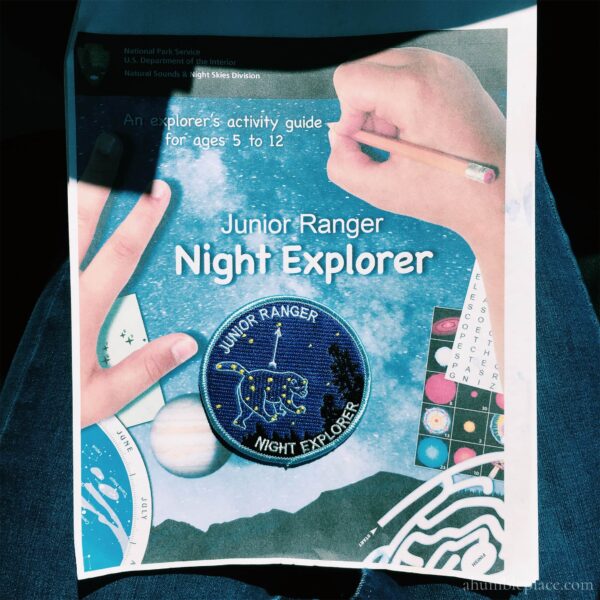 After that, we finished up a few other activities in the book and then headed in to the visitor center say the pledge and get the badge. We also turned in the Junior Night Explorer workbook, which we did at home in the months leading up to the trip, and B got a neat patch to add to his collection. We had to get to our Airbnb before it got too late so we weren’t able to spend more than 3 hours at the park, but that included driving along the rim and making several stops as well as eating lunch and working on the book. We definitely plan to go back so we can spend more time exploring and getting more badges! 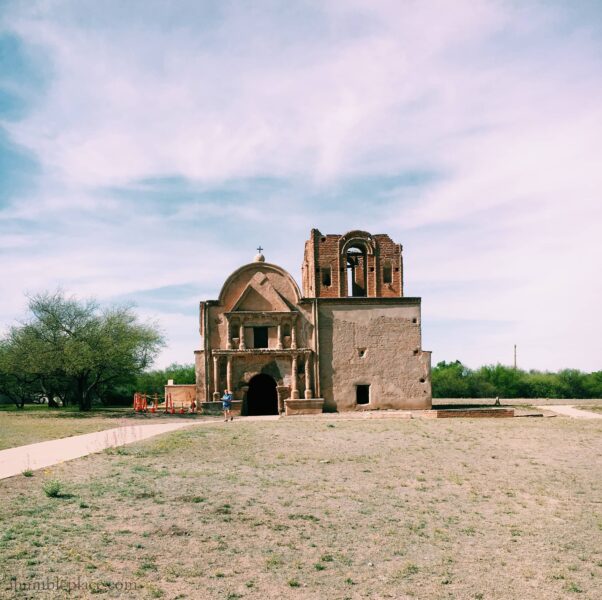 Other JR programs at this location: None

Tumacácori was the second National Park stop for us (we also stopped at the Meteor Crater in Winslow, Arizona, which is privately owned) and happened to be just down the road from the Airbnb at which we were staying. This is a small site, but was declared a National Monument by Theodore Roosevelt in 1908 so it is rich in history. This was also one of my favorite Junior Ranger programs to date.

Entrance fees are $5 per adult (they also accept the passes listed above among others) and this gets you into the grounds as well as the museum for one week. We asked for a Junior Ranger booklet but were instead given a little, laminated book with different things to find throughout the complex and a write-up about each. At the end of our self-guided tour, we were to come back to the park store to answer a few questions and collect badges. So, after visiting the beautiful garden and watching a short (and very outdated but mostly informative) video just outside the park store, we began our tour. 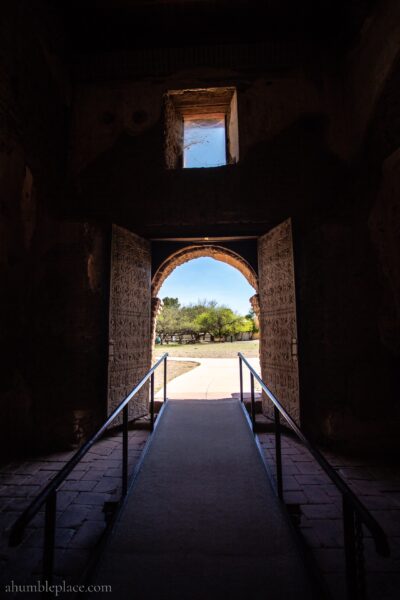 A quick but very important note about this park…. it was HOT. We visited in April and the temperature reported in our car was 106℉. Be sure to bring hats, light clothing, and LOTS of water. They do sell water at the visitor center/park store, but it’s very expensive so I’d recommend bringing your own.

Each page of the book had a picture of whatever it was we were looking for, so I’d show B and he’d begin his search. There are also little wooden number signs next to each object which helps. Once he found it, we’d read about it and then move on to the next thing. This took us on a tour through the church ruins, around the grounds, all the way to the lime kiln as well as the orchard, and then back to the museum in about an hour. I thought the language of the book was also easy for B to understand and it was really well-done. This was actually more engaging for him than some of the JR activity books we’ve done.

The church ruins are also very neat to see. While not quite what I expected (I thought they would be more intact), you can still see some of the original paintings on the white-washed walls and imagine what it was like for travelers who took shelter in the vestry even after the church had been abandoned. 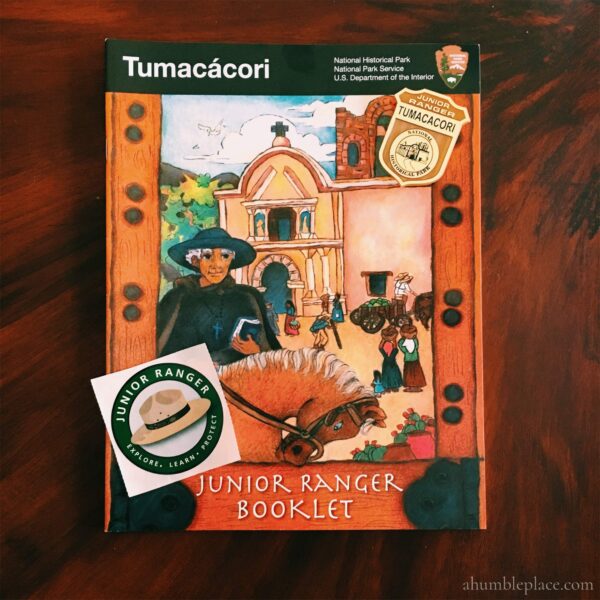 Once we were done with the grounds, we finished our tour at the museum and headed back to the visitor center to get the badge. We thought we were prepared as we had gone through the questions at the back of the book, but the Ranger at the desk asked completely different questions which I think threw B off. She gave him a break, though, because it was so hot and ended up actually giving both him and C badges (C’s first even though she didn’t really take part in our tour and was wandering around the shop while the questions were being asked 🙂 ), as well as Junior Ranger booklets that they looked through later in the car. 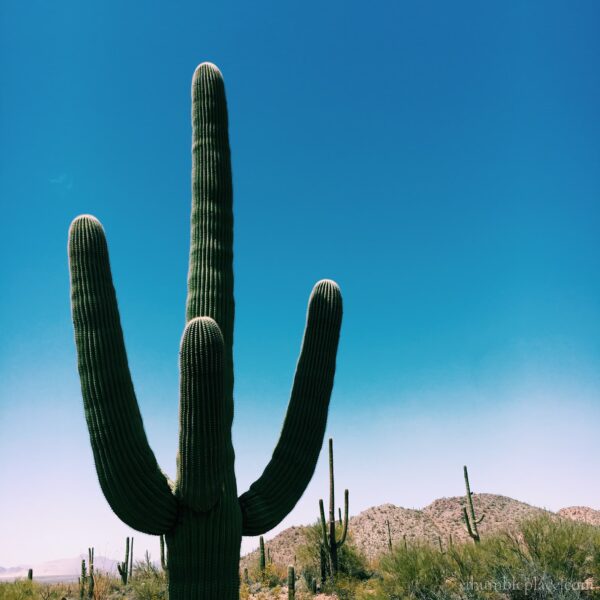 any (different booklets for different ages, including one for grown-ups)

appx. 1 hour for the younger booklet

Other JR programs at this location: None

Saguaro, home of the iconic saguaro cactus of the southwest, was our final Junior Ranger stop for the trip (we also visited Coronado National Memorial the day before but I think the book was beyond B’s level at this age – we may go back when he’s a little older). There is no gate to get into the park, so you pay at the visitor center. The fee as of April of 2018 was $15 per vehicle (as well as the passes mentioned above), which is good for a week.

We picked up our Junior Ranger booklet at the Red Hills Visitor Center which also has a very small museum-type area, a store, and there are a few walks you can take outside of the visitor center to see the saguaro cacti as well as other plants native to the area up close. When we arrived, the Ranger at the desk asked how old B was and then offered us one of two books – one for kids who could read and one for kids who were “still working on it.” (I liked her wording. 🙂 ) We opted for the book that required less reading as B is “still working on it”. We do plan to go back and get the older booklet as well at some point. 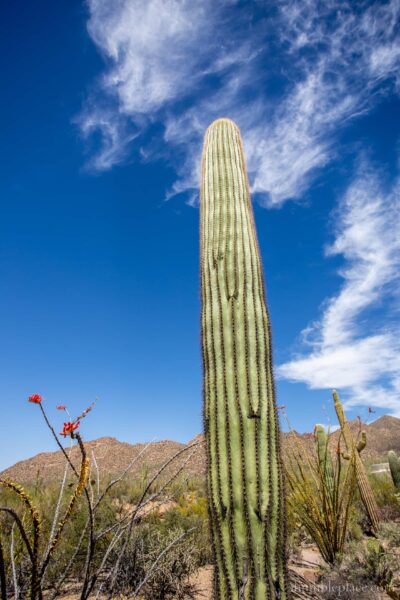 There’s a small sitting area in the visitor center with crayons and a table, so we sat there and started on the book. For this particular one, we had to do all of the activities, but this was completely reasonable as the activities, including a scavenger hunt (which can be done in the trails around the visitor center), plant and bird identification, matching activities, drawing your own petroglyphs, dot-to-dot, a maze, and more, were not too much of a challenge. We had the majority of it done in about 20 minutes and it was very engaging as well as educational. Once we had the majority of it done, we headed outside to take a walk on the paths and identify a few more things for the scavenger hunt. While we were meandering, a Ranger approached who had specifically been looking for B to help him and we got a little personal tour of the plant and animal life of the area – very neat. 🙂 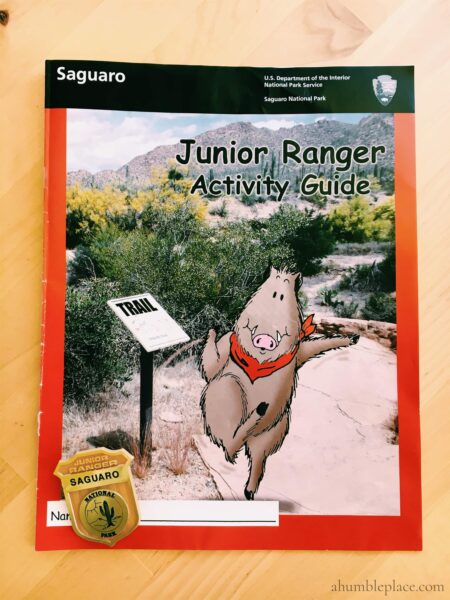 After our tour, we headed in to say the pledge and get the badge. They also handed us a slip of paper on which to write B’s name which gave us a discount in the store and they also printed out a special certificate with his name on it declaring his official Junior Ranger status at Saguaro National Park.

After that, per the Ranger’s suggestion, we drove up to Signal Hill which involved a short hike to see the petroglyphs (and my camera died just before we got there 😶), but it was a neat way to end the visit. This was another favorite park and JR program to date! 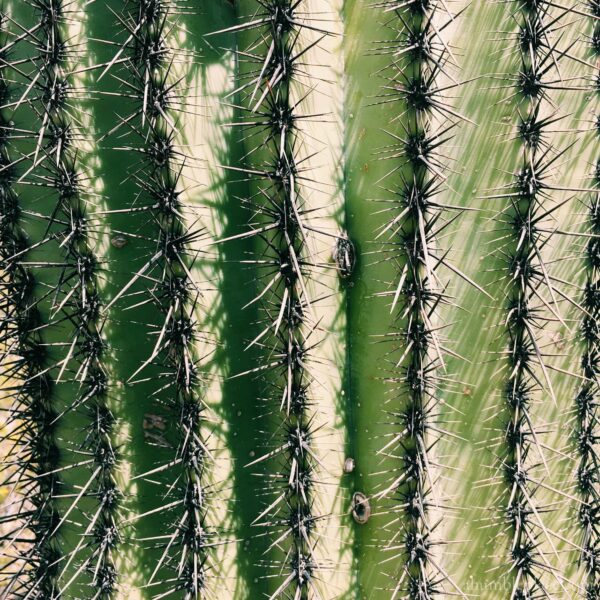 (Saguaro also offers a not-so-Junior-Ranger program for grown-ups. When we go back to get C’s badge, I think I may have to do that myself. 🙂 )

Other than Coronado, it was a successful JR trip! This area has so many National Parks to choose from that I was disappointed we couldn’t go to more but I’m glad we were able to see the ones we did! 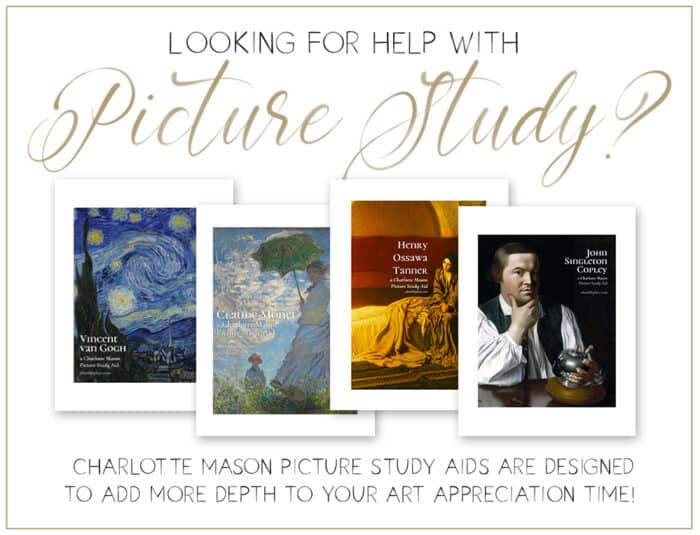