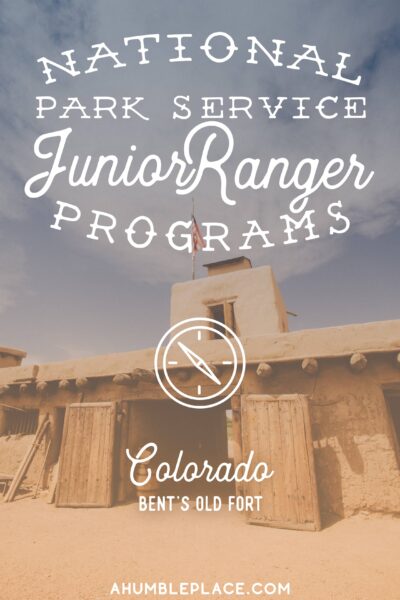 As we’re coming up on the anniversary of B’s first Junior Ranger badge, I thought it might be fitting to do a little recap of the place where it all started for us: Bent’s Old Fort. This tiny national historic site is located next to the Arkansas River on the eastern plains of Colorado near the town of La Junta. While it’s not one of the more “glamorous” of the national parks, it offers a great chance to immerse yourself in the life of the old west as well as learn about the history of the area and the Santa Fe trail.

An interesting find on Google books has a nice little history of the fort:

William Bent started work on the fort sometime in the late 1820’s or early 1830’s. He built with adobe, both because it was fireproof and because there was little timber available on the plains for so large a structure. As more than 100 Mexican laborers made mud bricks, Americans hauled in timber for roofs and gates. Gradually a building took shape that could be described by a later visitor as one that “exactly fills my idea of an ancient castle.” By 1833, the massive impregnable mud fortress stood completed in the midst of an unbroken prairie.

From their location in the heart of the plains, [brothers Charles and William Bent] and [Ceran] St. Vrain for 15 years managed a private trading empire stretching from Texas into Wyoming, from the Rockies to middle Kansas. Beyond this, they had major commitments in the Santa Fe trade proper: large mercantile stores in Taos and Santa Fe, and yearly caravans that traversed both the Cimarron and Mountain Branches of the trail. Charles Bent’s marriage to the daughter of an important Mexican family in Santa Fe securely anchored the company’s New Mexican base. The partners became “mighty men, whose will was prairie law, who could sway whole tribes, who knew Indians and Mexicans as few others did.”

Because of its location in the heart of the Indian country, the fort was a natural spot for intertribal councils and meetings between the southern plains Indians and the U.S. Government. In 1835, troops under Colonel Henry Dodge met near Bent’s Fort with chiefs of several tribes to discuss depredations that had taken place on the Santa Fe Trail. Five years later, at a great peace council held 3 miles below the fort, major tribes — including the Cheyennes and Comanches — feasted, danced, and exchanged presents purchased from William Bent. The Indian peace concluded at this council was never broken. In 1846, Bent’s Fort was chosen as headquarters for the Upper Platte and Arkansas Agency, a move that took advantage of both the fort’s location and William Bent’s singular influence with the Indians.

The steady flow of soldiers across the plains during the Mexican War, together with the influx of settlers, goldseekers, and adventurers that came later, irrevocably changed the Great Plains. Watering places were fouled; precious wood was wantonly used; bison were frightened away from accustomed haunts. The company was caught between the millstones of resentful Indians and invading whites. Indian warfare commenced seriously in 1847, and from then on, the days of rich trading were gone. Meanwhile Charles Bent was killed in a revolt in Taos. This blow, together with the sharp decline in business, destroyed the firm. St. Vrain departed to New Mexico, probably after selling his interest in the fort to William Bent

The final blow to Bent’s Fort came in 1849 when cholera, probably brought by immigrants, spread through the tribes. What little trade had remained dwindled to a standstill. William Bent, disillusioned and disappointed, had had enough. After loading his family and a few employees into wagons, he set fire to the storerooms and powder magazine and abandoned the fort. What had been the center of a giant commercial empire was left a smoldering monument to Manifest Destiny.

The fort was rebuilt in 1976 based on various historical documents that described the location as well as archaeological digs in the area. It’s interesting to me that even before the current fort was built, it was still a national park and visitors came just to walk around the ruins grounds. I’m glad they were actually able to rebuild the fort itself!

Since the fort is only about 2.5 hours from where we live, we decided to make a day trip rather than camp. The drive down was easy and we arrived early in the afternoon. We happened to be visiting the year the NPS was celebrating its 100th birthday, so many of the parks, including this one, were free. However, as of this writing, the entrance fees are $3 for adults, $2 for kids 6-12, and kids under 6 are free and they also accept the normal national passes. There are additional fees for special events.

The parking lot is a bit of a distance from the actual fort, so be prepared for a walk and bring anything with you that you might not want to go back for (especially water!). I actually kind of liked this aspect of it as it was particularly hot the day we went and it gave a teeny tiny idea of what it may have been like back in the day for someone who was tired and thirsty after a long ride and was just arriving at the fort. As we approached the front gates, we passed a grave as well as an old covered wagon and horse travois which were interesting to look at up close.

Upon entering the fort, we were welcomed by a “trapper” in period dress who was extremely helpful in telling us a little about the fort and getting B’s Junior Ranger booklet for us. The fort is also part of the Santa Fe Trail Junior Ranger as well as the Wagon Master programs, but B was too young for either of these so we’ll go back to complete these activities later on.

The fort itself is surprisingly large and a fantastic recreation of the original structure. Scattered throughout the rooms and open areas are interpreters in period garb who are ready and willing to answer questions and do demonstrations. We sat down on one of the benches near the entrance and took some time to look through the JR book to see what we needed to do.

The JR book for this location is a very simple one. The number of activities required is based on age with kids 7 and younger doing 5 activities, ages 8 to 10 doing six activities, and 11 and up doing all of them. The activities include looking at maps and answering questions, tracing your route through the fort, a maze, answering questions about the children who lived in the fort, matching games, and writing in a journal. There is some reading involved, but we just read the questions to B and then wrote down his answers as this was before he was really reading or writing.

As we went through the book, we also walked through all of the rooms on both levels of the fort. The lower-level rooms can mostly be accessed from the main square and include things like a dining hall, blacksmith shop, and sleeping quarters. On the second level is a lookout room, game/saloon room, and more sleeping quarters. To the left, as you enter the fort, there’s a low hallway that you can go through to access a back walkway that leads to the bookstore and you’ll find an adobe brick-making display as well as random peacocks wandering around. On the second level, there is also a system of walkways that lead to a type of lookout area in the back of the fort where you can see the animal corrals behind the fort as well as the surrounding prairie.

It was a neat place to visit and we definitely plan to return! If you have extra time, the Sand Creek Massacre National Historic Site is about 1.5 hours to the northeast of the fort, but does not include a Junior Ranger Program.