I have always had grand, huge intentions for the summer months, mentally filling each weekend with camping trips and visits to local attractions and excursions to the mountains while the weekdays themselves are crowded with read-alouds and hikes and art projects, etc. until there isn’t a minute of space that isn’t crammed with excitement. I picture us all developing deep tans from all the time we spend outside and making family memories that will offer up private jokes for the four of us to pull from for the rest of our lives.

And then the summer months actually come, reality sets in, and I get to check maybe a quarter (a third if I’m lucky!) of those things off my mental list and this summer has proven to be no different. Maybe that’s really the intention…..plan SO MANY things that the odds are in our favor that at least one or two of them will actually be done. 🙂 At any rate, the one or two check marks this summer included a trip in June that we managed to make down to Durango to visit two National Parks in the area.

Our first little family vacation was down to Durango back in 2011, just after B’s first birthday. There were only 3 of us at the time and figuring out the logistics of actually going on a vacation with a baby were mind-boggling to me. Despite this, we somehow made it down there, stayed three nights, and came back all in one piece (sans one of B’s first shoes, the losing of which I will never forgive myself). When we were thinking of a nice, quick trip we could take that wasn’t too far to drive this year, Durango came up again and we decided to relive the adventure with C in tow as well.

This was another Airbnb experiment that went extremely well and I was able to find a very nicely priced two-bedroom condo above a garage in the country, complete with a sheep pasture and a sweet little mallard with her own tiny pond. If ever you’re looking for a place to stay away from home, I’ve been really happy with our two Airbnb experiences!

Our first full day there brought us to Mesa Verde National Park which we had also visited back in 2011. Entrance fees are currently $15 or $20 (depending on the time of year you visit) unless you have an annual pass, it’s a free day, or you have a fourth grader. Since our last visit, they built a beautiful visitor center at the entrance where we stopped to pick up the Junior Ranger booklet for B. There are a few displays there and of course the requisite bookshop as well as a place to buy tickets for ranger-led tours of some of the cliff dwellings. You don’t need to go on one of these to get the badge (though you can to fill one of the requirements) and they’re probably not suitable for small children (you can see descriptions of each here). However, if you have older kids and are planning on going on one of the guided tours, I highly recommend stopping at the visitor center a day or two in advance to buy tickets as they sell out very quickly.

The Mesa Verde JR booklet (which you can see online here) is broken up by age, the youngest being 4, with different types of activities for each age group (and a minimum of 3 that need to be done). For B who was six when we went, we did the first set of activities for ages 4-7 which were very reasonable for him. Under each activity heading, there is also information about where in the park it needs to or can be done which was extremely helpful. If you’re planning on going one of the ranger-guided tours, you should be able to do all of the activities in the book very easily. However, if you’re planning on doing a self-guided tour, “Cliff Dwelling Bingo” can be more difficult as Spruce Tree House, the main cliff dwelling that visitors used to be able to walk to, is currently closed. The only other cliff dwelling accessible on your own is Step House which is only open until 4:00 pm, but the Rangers will not let you start your hike down (which is about 20 minutes) if you arrive after 3:30-3:45 (we learned this the hard way), so you may want to do this before you move on to any other areas in the park. It’s possible to do the Bingo page if you’re sitting at the overlook with a view of Spruce Tree House just down from the museum, but it’s not nearly as fun being able to climb around in a cliff dwelling.

“Ancestral Puebloan Life” is done in the museum further into the park, which has some interesting exhibits, the requisite bookshop (it’s requisite), and a courtyard area for Junior Ranger activities. It’s open until 6:30 pm in the summer time (with earlier hours the rest of the year), so you may want to save this until last so you can also turn in your JR booklet here as well.

We ended up doing all of the activities for B’s age group except “Generations” as we didn’t have enough time to do the loop drive before we headed back to the visitor center just before closing to get his badge. This is another park where you want to allow yourself a plenty of time. There’s a lot to see!

The next day brought us down to northern New Mexico. E has spent quite a bit of time in that area for various work projects, so it was a little trip down memory lane for him as we made our way to Aztec Ruins National Monument. Entrance fees here are $5 per person for those over the age of 16 (unless you fall into the above-mentioned categories). Children under that age are free. A sidenote: there is a really nice picnic area just to the east of the visitor center that is great for lunch!

This monument offers both online activities, which you can do to earn a patch, as well as a booklet that you can pick up in the visitor center to earn your badge while you’re there. We haven’t gotten to the online patch yet as we’re still working on B’s junior archaeologist badge, but I should probably get on that soon. 🙂

There were several books to choose from based on different themes. The ranger did not tell us that these were also different levels based on age (preschool, grades 1-2, grades 3-6, grades 7-12), so unknowingly, B chose one of the intermediate books for grades 3-6, which was about archaeology (the other options in this age group are water and animals). When you’re there, you may want to look through the booklets to see what might be appropriate for your child since you need to do ALL of the activities in order to get your badge. Some of the activities in our book were a little too advanced for B, so he did need quite a bit of help with it.

Many of the activities were in the visitor center (which also contains the requisite bookshop), including a few displays and a short video that is best watched before you go outside to the ruins. The rest were in the ruins themselves, including the completely re-built great kiva (which was getting some fresh coats of paint when we were there).

When you first arrive, the Rangers offer a laminated book that allows you to take a self-guided tour of the ruins. This was very helpful in pointing out just exactly what we were looking at in each spot. As you’re making your way through the ruins, be prepared to go through very low, small doorways as well as some very stuffy, dark (but nice and cool compared to outside!) rooms in the very back of the ruins. It took us about a half hour to get through all of it and we took our time. If you’re going in the warmer months, make sure you bring water and some kind of head covering as it was VERY hot. 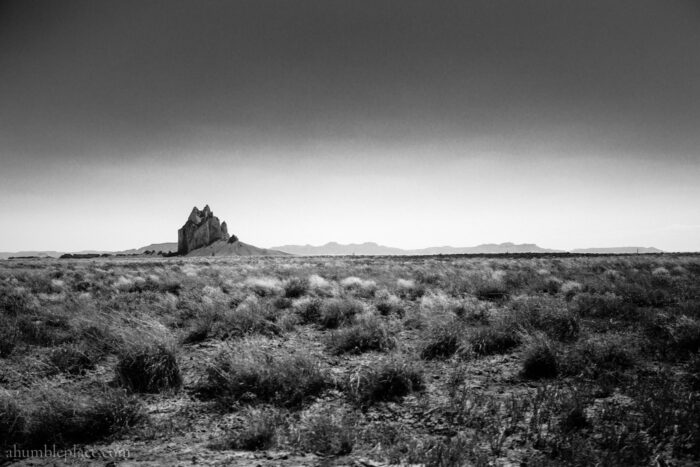 We were there for probably about two hours in all, eating lunch, watching the video, and going through the museum and ruins before B recited the oath and got his badge. Then we headed east to see one of the power plants E has worked at before we attempted to get out to Shiprock because it’s just kind of an amazing rock formation and we were actually able to see it from Mesa Verde the day before. Being the typical Americans that we are, we assumed there would be some kind of parking lot or visitor center or something nearby, because capitalism. But due to the fact that it’s on Navajo land and is considered sacred, there is no easy way to get to it (and access is actually not allowed to those not belonging to the Navajo nation, such as ourselves). I got a few pictures from quite a way out, but we didn’t go any closer. In some ways, it’s kind of refreshing to see that not every single interesting natural formation in this country has been commercialized.

We packed up the next day and headed home. It was a short trip, but Camilla was alive when we got home and we didn’t have any major mishaps, so we counted it a success! B is now also up to 11 Junior Ranger badges, including all but one of the Colorado locations! 🙂 You can see our other Junior Ranger adventures here.