Home > My Journey to Real Food.
This post contains affiliate links and I may be compensated if you make a purchase after clicking on my links. Also, as an Amazon Associate, I earn from qualifying purchases through them as well. 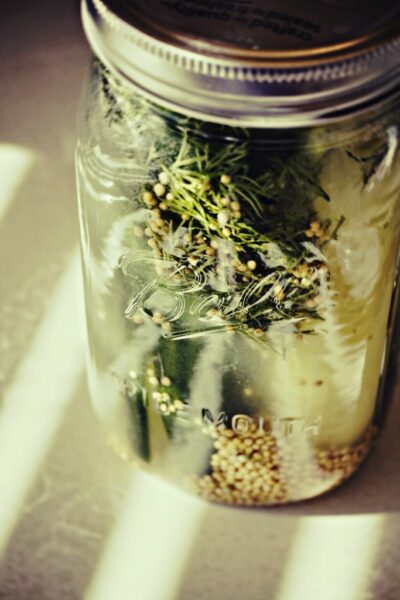 I finally made it to the local, semi-monthly Weston A. Price Foundation (WAPF) meeting yesterday after having been eating this way for over a year and a member of the organization since last fall. I’m very good at coming up with excuses to not go to events like this, but after having spent a week alone with B, reading a recent post on the Dyno-mom blog (who I actually got to meet at the meeting!) about this very topic, and E nudging me out the door, I decided to go and it inspired me to write down my little journey so far down this path to real food.

I grew up eating something in the lines of the Standard American Diet (SAD)…lots of frozen/canned/jarred/packaged meals (I pretty much subsisted on Campbell’s soup, Top Ramen, Kraft Macaroni & Cheese, bologna, and frozen meals like Souper Combos and Healthy Choice), lots of carbs, lots of sugar, lots of hydrogenated oils (Country Crock was a permanent staple in our house), skim milk, no breakfast, and the only fresh vegetables I remember eating was the occasional giant bowl of iceberg lettuce drenched in Western dressing. I remember going to a local co-op every once in a blue moon to get natural peanut butter (the smell of which, to this day, reminds me of that co-op) and a box of Haagen-Dazs ice cream bars. I continued this pattern when I moved out on my own, except I added real butter to the line-up because it tasted better on the many cans of corn I ate. Just not good.

I started eating what I considered to be less processed foods a few years later when I was having horrible skin problems and started using the Burt’s Bees line of skin care, which seemed to be the only thing that worked for me. I was still buying food that came in packages, cans, and jars, but I thought it was okay because most of them said “Organic” on the packaging. I started to cut back on my meat consumption as well, and still didn’t include a lot of fresh vegetables (other than corn-on-the-cob….I really loved corn) until we switched to a naturopath doctor who recommended pastured eggs for breakfast every day (which shocked me as I had high cholesterol at the time). We found a local farm that includes eggs with their CSA delivery, so we added a vegetable share as well. Of course there was still the skim milk and still lots of sugar.

When I got pregnant, things started to change more dramatically as I followed the Bradley method for natural childbirth, which sets a guideline of 100 grams of protein per day, so I started adding in a lot more meat and (shock!) switched to 1% milk. Of course the meat wasn’t pastured or grass-fed as I didn’t know what either of these things was, and the milk was ultra-pasteurized, but at least I was getting more protein. This continued until after B was born until early in 2011 when I happened to start reading the Nourishing Traditions (NT) cookbook and Real Food by Nina Planck, which kind of flipped my food world upside-down.

I had been wrestling with the idea of saturated fats being not as bad as everyone would lead you to believe for a while after having found a recipe for popcorn that included coconut oil, which is high in saturated fat but oh-so-good for you, and doing more research on that. At first I thought, “That’s crazy!” But the more reading I did about it, the more it started to make sense. When I finally dug into NT, it all just started to click and I loved learning how all the different fats work with protein and vitamins and all the good things found in real food to make the nutrients more easily absorbed. The idea that all this stuff we do to food, all these things we add to it to make it look/taste/smell/etc. better isn’t actually doing it or us any favors and is, in fact, destroying our health. From a Christian perspective, the idea that God gives us food that doesn’t need to be altered in order to be nourishing to our bodies is one that I can embrace wholeheartedly.

So just before B started solids (which I’m so thankful for!), we overhauled our way of eating and I’m so glad we did. We now drink raw milk, grass-fed beef (we bought part of a cow, which I thought was crazy before), pastured (sometimes soy-free) chicken eggs and meat, organic produce, homemade kombucha, lacto-fermented foods, very little sugar (and generally, when we do have sugar, it’s in honey or maple syrup form), and very little processed food. We do stray every so often, but the majority of our diet falls into the traditional foods way of eating.

While we haven’t noticed any huge physical changes (other than the fact that I lost all of my pregnancy weight plus another 15 pounds on top of that, my vitamin D is at a good level and my cholesterol is fine now), I think psychologically for me it’s made a huge difference. There’s something very fulfilling in sitting down to a meal that I’ve prepared with my own two hands, from scratch, that I know will nourish my family in so many ways.

Not bad for a girl who grew up without a mom. 🙂

In future posts, I’ll share some of the first steps I took to eating this way that made it a lot easier for me to get to this point.