When I first read Nourishing Traditions and started down this path of eating more traditionally, the first thing that stuck out to me was Sally Fallon mentioning that we should have some kind of fermented food at every meal. At the time, I was more than a little overwhelmed with the book in general as it kind of rocked my food world. I was still a relatively new mother (B was about six months old), so the idea of fermenting something to go with every single meal (and even really understanding what fermenting was as I still hadn’t pictured anything more than beer, wine, or maybe sauerkraut) was a little beyond my scope of reality. I figured the fermented foods part was probably more for overachievers and maybe it was optional? Sort of just a suggestion? Hopefully?

“Research has shown that regular consumption of cultured dairy products lowers cholesterol and protects against bone loss. In addition, cultured dairy products provide beneficial bacteria and lactic acid to the digestive tract. These friendly creatures and their by-products keep pathogens at bay, guard against infectious illness and aid in the fullest possible digestion of all food we consume. Perhaps this is why so many traditional societies value fermented milk products for their health-promoting properties and insist on giving them to the sick, the aged and nursing mothers.” Nourishing Traditions by Sally Fallon, p. 81

And this isn’t a new idea. Fermented foods have also been used throughout history in various cultures:

“Yoghurt is the fermented milk product with which we are most familiar in the West. It comes originally from Bulgaria. Unlike spontaneously soured milk, yoghurt is produced by first heating milk and then adding a culture. In Russia, a popular beverage is kefir, a slightly effervescent beverage, sometimes mildly alcoholic, of fermented cow, goat or sheep milk. Koumiss, another Russian beverage popular in the eastern regions, is made from mare’s milk. Scandinavian countries produce a cultured milk product in wooden barrels called longfil, which keeps for many months. The Norwegians make a variety of longfil called kjaeldermelk, which they produce in caves. In the Middle East, milk is soured in special containers to produce laban. In India, milk from cows or water buffalo is soured to produce dahi, which the Indians consume with every meal. The Masai tribesmen of Africa consume milk as their principal food—always in soured or cultured form.” Nourishing Traditions by Sally Fallon, p. 80

So a few months after first reading all of this, when I finally felt like I could maybe try it, I dove into the world of lacto-fermented foods and started leaving dairy products on the counter for days. I began with relatively simple ones…cultured butter, buttermilk, and whey (E was kind enough to make labels for me) which consisted of a lot of pouring things into jars and letting them sit out. I was very proud of my collection of mason jars in the refrigerator, but once they were made….then what?

The butter was easy as that was our primary cooking fat (though heating it up negated the “cultured” aspect) and the whey could be used to start other ferments, but the buttermilk? During that time, I do believe I had more than one batch of buttermilk (a byproduct of the butter I was determined to make) sit in the refrigerator for days…and weeks……..and months, before I finally gave into the fact that I really didn’t need to be making my own butter and buttermilk. I think in the beginning, for me at least, much of my learning came from participating in the process rather than using the final product.

At least that’s what I told the side of myself that was angry I was wasting food. 🙂

At any rate, I finally learned that fermented foods don’t have to be ridiculously complicated and adding them to your diet is actually probably one of the easier parts of eating more traditionally. Sure, you can make complicated chutneys and pickled this or that or yogurt or kombucha (or buttermilk you’ll never use), but usually fermentation consists of slicing/chopping/shredding/mashing a vegetable, covering it with some whey or other starter (salt, vegetable, etc.), and letting it sit on the counter for a few days. That’s really it. Given the health benefits of including even just a simple ferment with your meals, I think it’s definitely worth it.

So, today I’m sharing three ferments that I’ve found to be particularly easy and can usually be found in my kitchen….sometimes all simultaneously if I’m feeling especially productive at a given time (or happen to be writing a blog post about all three of them….).

These are tried-and-true favorites for us….ferments that the kids will consistently eat (thus not going to waste) and require little-to-no effort (because I’m laaaazy). Two of the three do require the extra step of making whey before you get started, but that’s just a matter of stringing up some yogurt and letting it drip for a day (you can see my apparatus here) and then you have it for six months and many different ferments (and the byproduct, yogurt cheese, is very good). Easy!

I’ll start with the very easiest of all….sauerkraut. I HATED sauerkraut growing up. Hated. With a passion. So it took me a while to make this one despite how easy it is. However, there is a world of difference between the canned/jarred sauerkraut I got with my brats and polish sausage as a kid and fresh, homemade sauerkraut. There is absolutely no comparison.

Next we have fermented yams. Because they’re roasted before being fermented, the final product is very sweet and my kids treat this like dessert at lunch time. It’s is also a fantastic baby food. 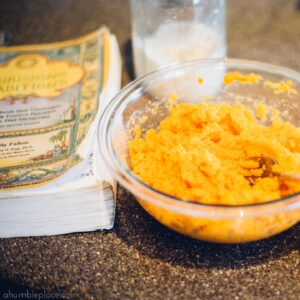 And finally, ketchup. This is one of the more basic ferments I ever made because it’s so easy and is used so often. While it doesn’t have the same texture and taste as your standard Heinz ketchup, my kids have never complained. 🙂