A few months back, Amazon was offering the Kindle version of Tsh Oxenreider’s book Organized Simplicity for free. As I like free things and I like organization, I jumped on it and E and I started reading it together. I thought I had simplicity all figured out…less is more, right? Just get rid of stuff and you’re on your way! But putting that in to practice as well as really embracing the concept of simplicity is much easier said than done, especially in this day and age. Simplicity could mean any number of things as it’s kind of an abstract concept, and as I had never put any real thought into simplicity until I read the book, I hadn’t realized this.

I’m kind of obsessed with it now. Okay, obsession is a strong word. But I really liked it. Not even so much in the steps that she outlines or the cleaning recipes she offers, or any of the other helpful things listed in the book, but more that she offers a definition of simplicity that isn’t lofty or vague. I think by its very nature, living a simpler life is very appealing to many people, but she makes it all the more embraceable by making it achievable as well. It’s concrete and actionable. It’s simple.

So we came up with a family mission statement and started the great purge, the first of which was B’s room which, in its previous life, was our office/extra bedroom/black-hole-of-whatever-didn’t-have-a-place-somewhere-else-in-the-house. It sputtered along and took us a few months to do, mainly because we’re lazy folk and enjoy using our free time to do things that aren’t chore-related (well, I do anyway…E is a different beast when it comes to that). But we’re finally there and were able to give B a room of his own this week. Furniture is forth-coming.

The idea of purging isn’t really all that new, but I think the book was kind of the kick in the pants we needed to actually take a look around this place and see what things around here we just didn’t need or want, yet held on to for no apparent reason. We still have a long way to go as we have a garage storage area full of totes to go through, but getting that one room done has given us such a huge sense of accomplishment that I don’t think the garage totes will be full for much longer. We’d ideally like to move in the next year or two and it’ll be a lot easier if we don’t have all that extra stuff. 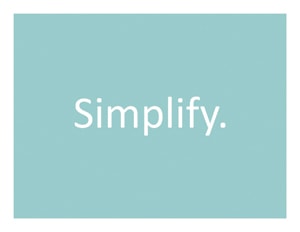 As a little more motivation, I made this sign to print out and put on our fridge and I’m offering it here for download as well. It’s simple…to the point…kind of the message I was trying to get across, and a good reminder when I’ve got a cart full of Amazon purchases to be made to take a second look and see if I really need whatever it is I’m buying.