This post contains affiliate links and I will be compensated if you make a purchase after clicking on my links. 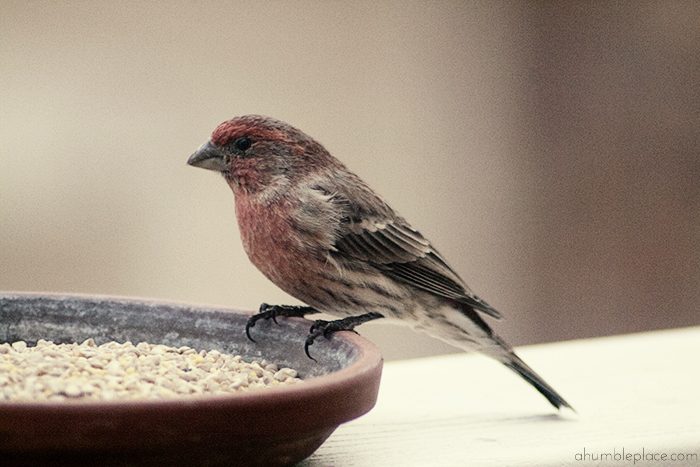 I haven’t done a system status since November, so I have some catching up to do. Things are still status-quo around here…still looking for a job for E. Still hoping. We’ve had both good news and bad news flung our way in the last few months and the roller coaster ride of emotions is beginning to flatten itself out. I don’t know if this means we’re growing more numb to it all, or we’re able to keep a positive light on things. I’d like to think it’s the latter.

C turned one in the end of January. ONE. How did that happen? She’s still so amazing and precious and beautiful and I love her to pieces. She started walking about a month ago so we just opened up more of the living/dining room area and occasionally the kitchen to her and she seems to be thankful for more room in which to meander. When we did this for B, I made a little cupboard for him with three paintings taped to the inside of the door and wooden vegetables and eggs and pots and pans and other “kitchen” things in it. Needless to say, it got a little trashed over the last three years, so I took some time today to clean it out, repairing (and throwing out) a few of the things. She spent the morning wandering around the house carrying a pitcher with wooden eggs in it, setting it down every so often to offer someone an egg and babble something at them in the process. ♥

I started the winter curriculum with B in the beginning of January and I’m so, so glad I found this program. It’s been absolutely fantastic to add a little more structure (but not too much) to our weeks. I also rearranged a few things and he now has a little art cabinet in the living room where he can pull out papers, crayons, markers, pens, etc. whenever he wants to draw to his heart’s content. Pipes and water tanks and outlets and wires and switches seem to be his current obsession. His little brain is amazing.

In the end of February I’m into….

In December I read Life After Life (which was beautifully written), The Girl You Left Behind (I got into a Jojo Moyes kick there for a while), and The Princess Bride (I’ve owned the movie for years and the book was very different than what I was expecting).

In January I read The Peacock Emporium (the main character reminded me too much of myself….not in a good way), The Last Letter From Your Lover (engaging but sad), and Lila (lovedlovedloved).

And in February, I read The Midwife: A Memoir of Birth, Joy, and Hard Times. I LOVED this book. Loved. Other than one teeny part that was a bit too descriptive to me, it was a fantastic read. I picked up the sequel and plan on starting on that soon. I also read Bel Canto per the suggestion of a friend in my book club. I really liked this one as well. The ending was sad, but inevitable (though the post-ending was a surprise), and I loved the character development. The woman who narrated the audiobook version did an amazing job with all the voices and accents.

The Blacklist is back, so I’m re-addicted to that. My HSP self really, really doesn’t like the more graphic parts of it, but the storyline is just so engaging that I can’t seem to stop myself from watching it. Downton Abbey is back as well! What is it with these BBC shows only on once a year in 8-show installments? Absence makes the heart grow fonder, I guess. I’ll be sad when it’s done after next week (but then I think Call the Midwife starts back up!).

E has also sucked me in to The Goldbergs (who can’t love the 80s?). Honestly, between this show and Brooklyn Nine-Nine, I think I must have a lot of love for my husband.

I’ve had “You Are my Flower” by Elizabeth Mitchell (or the Carter family…whichever you prefer) song stuck in my head for the last few months and I sing it to C sometimes, so I downloaded the album. Elizabeth Mitchell is probably my favorite childrens’ music artists. Her voice is so peaceful.

We watched Lincoln on his birthday as we thought it might be fitting. I was actually surprised at how much I liked it when I’ve been putting off seeing it for so long because I thought it would be violent and dark and depressing. I wish we all spoke like that still…eloquent (but sometimes not).

We picked up Make It Paleo II at Costco last week and E made the home fries for breakfast on Saturday. He’s great at breakfast foods in the first place but these were also just fantastic. I’m looking forward to trying more recipes from the book!

Easter is coming up so I’m starting to put together baskets for B and C. I’m gathering ideas on my Pinterest board, which you can peek at here:

We also picked up an unfinished bookshelf for C as she has, literally, no non-sleeping-related furniture of her own now and some Yolo Colorhouse paint (custom mixed in the shade of Awesome Violet…it’s awesome). I think this means I have to get around to actually painting it one of these days so I can put some of the adorable little things she received for her birthday on it.

And a new little section to my system status! Per the suggestion of B’s winter curriculum, we picked up a bird feeder to hang on our deck and observe “wildlife.” Ironically, E and I are far more into it than B is and we’ve been a little bird-obsessed in recent weeks. Case in point: while we were watching Lincoln, there’s a scene where he’s delivering a speech and birds are singing in the background, which we strained to hear and identified a red-wing blackbird.

In the dead of winter, we weren’t expecting much, but have been pleasantly surprised. So far we’re at 4 varieties: house finches (seen at the top of the post), red-breasted nuthatches (E’s favorite), black-capped chickadees, and, very occasionally (and my favorite) goldfinches (though they don’t have the yellow plumage just yet). We think we may have almost had bushtits (what a name) but they didn’t stick around at the feeder. I hope they come back because I’m apparently a bird dork now.

mama-son stained glass paper hearts. <3 #weefolkartwintercurriculum A photo posted by @humbleplaces on Feb 13, 2015 at 11:00am PST