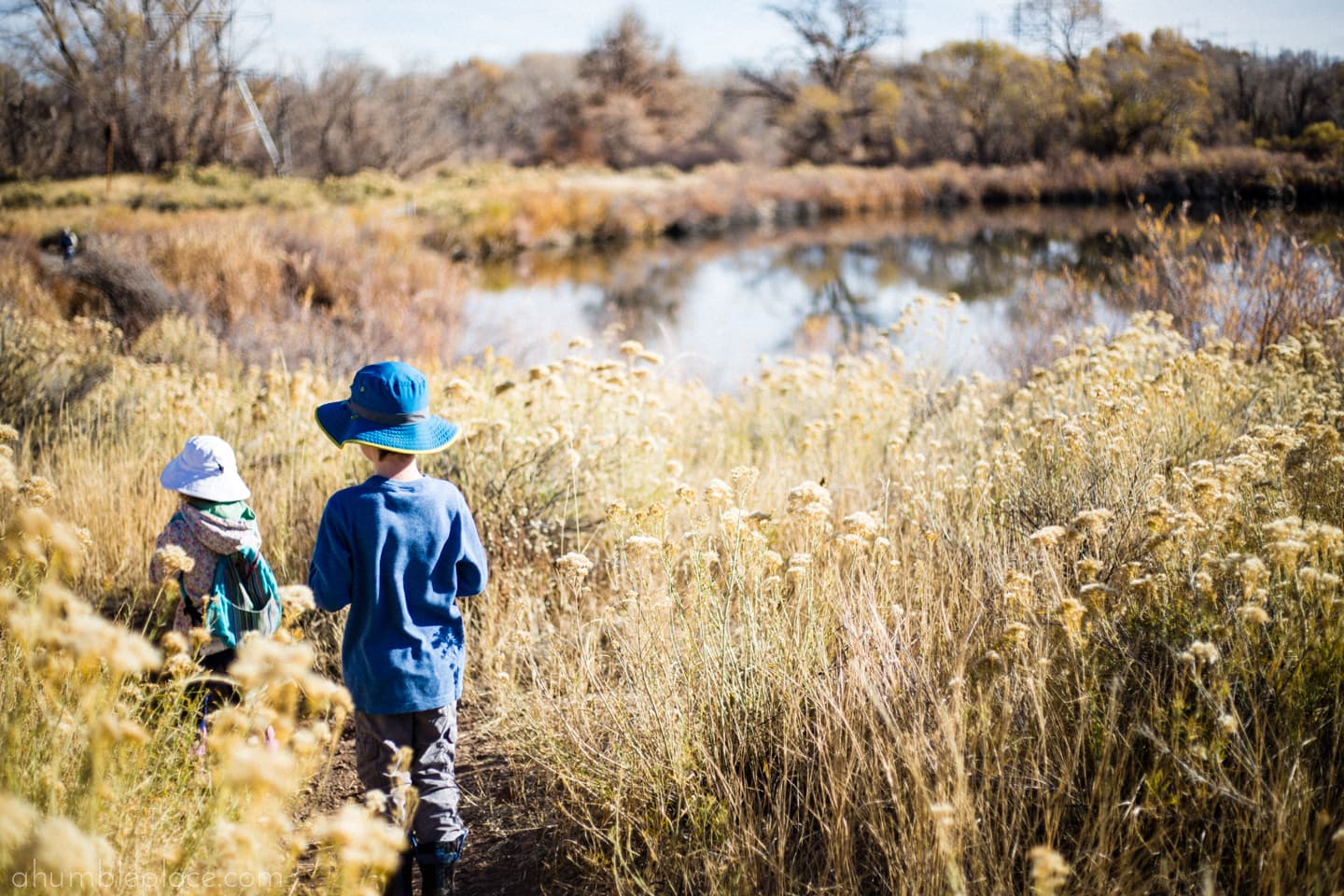 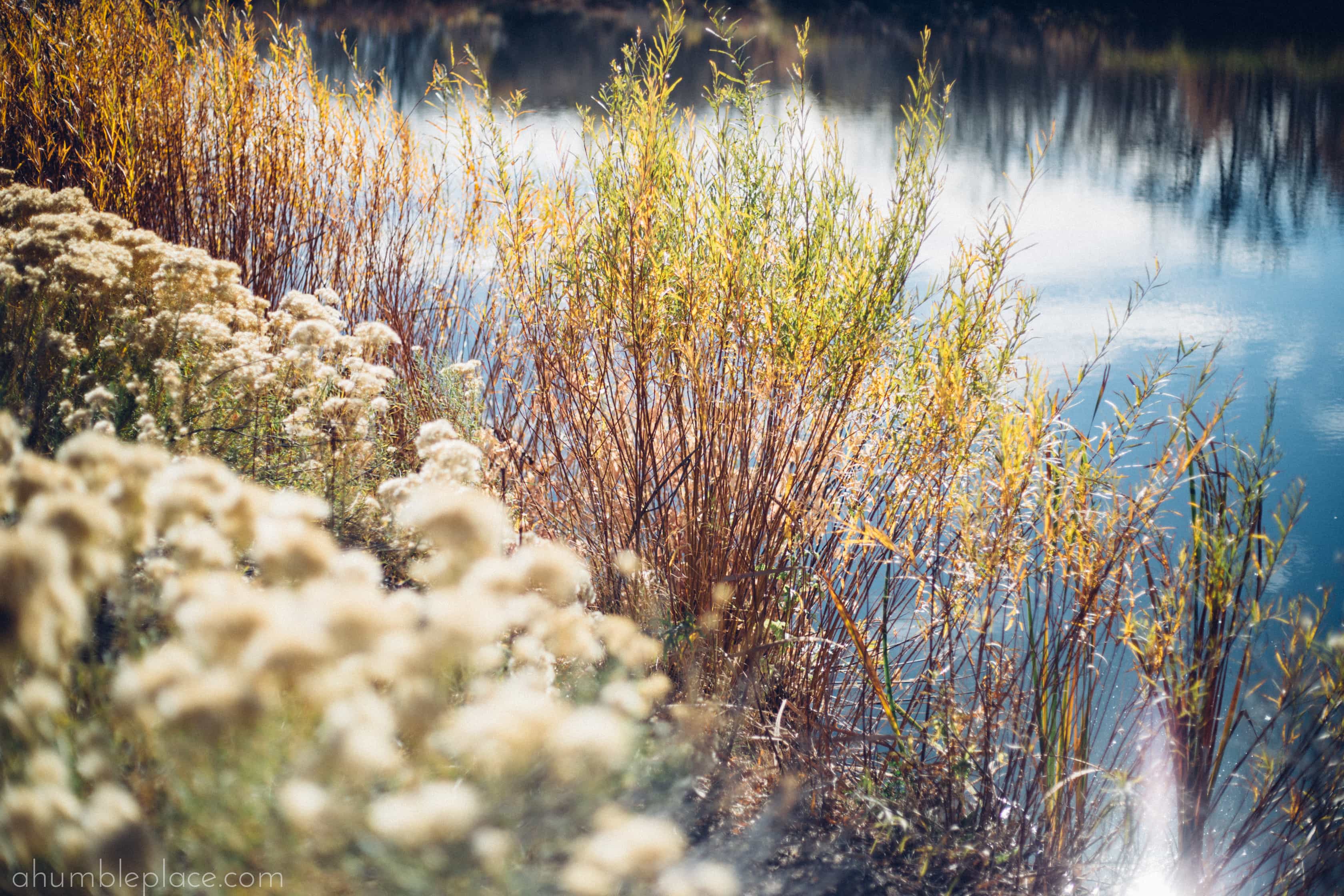 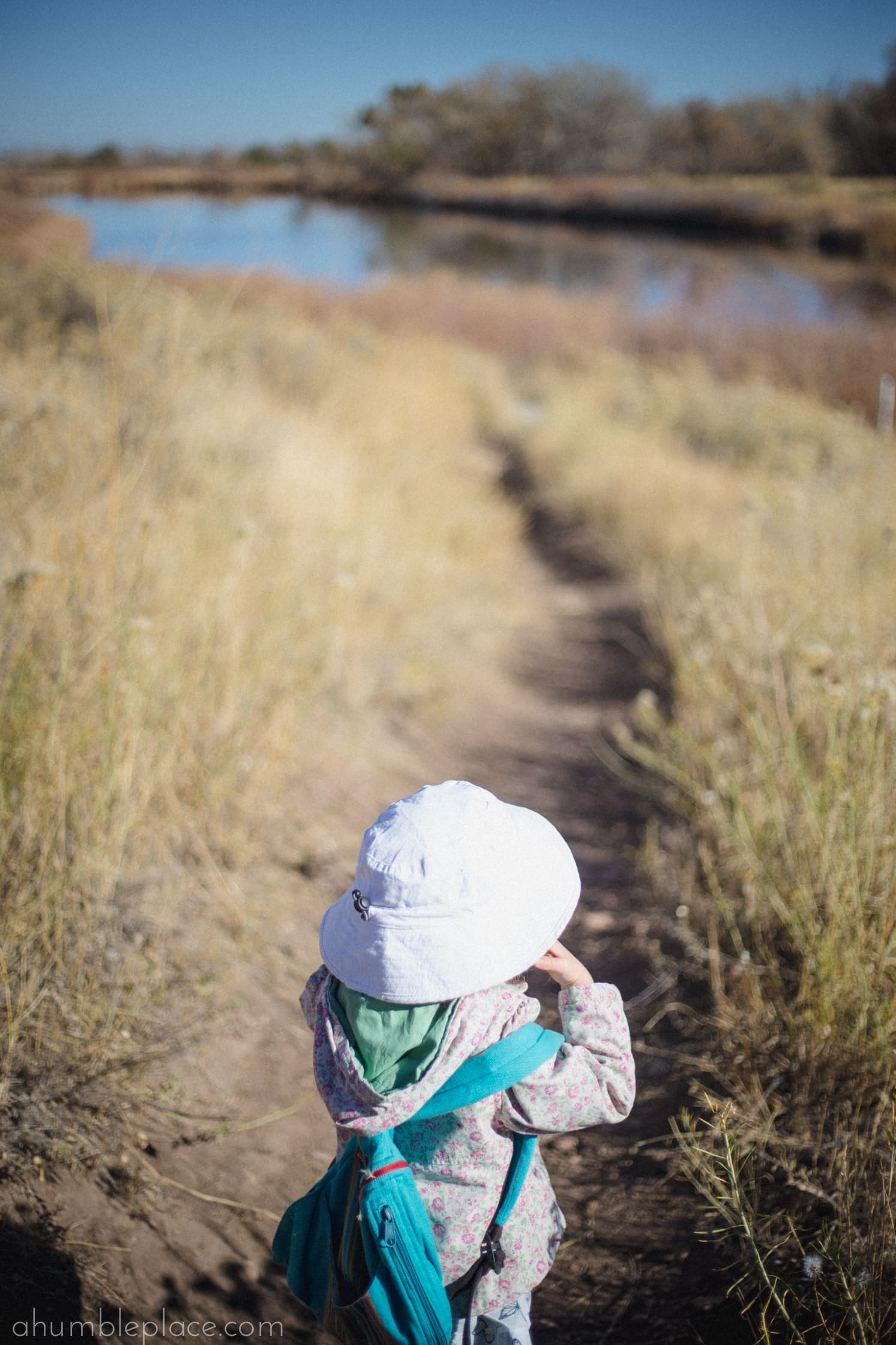 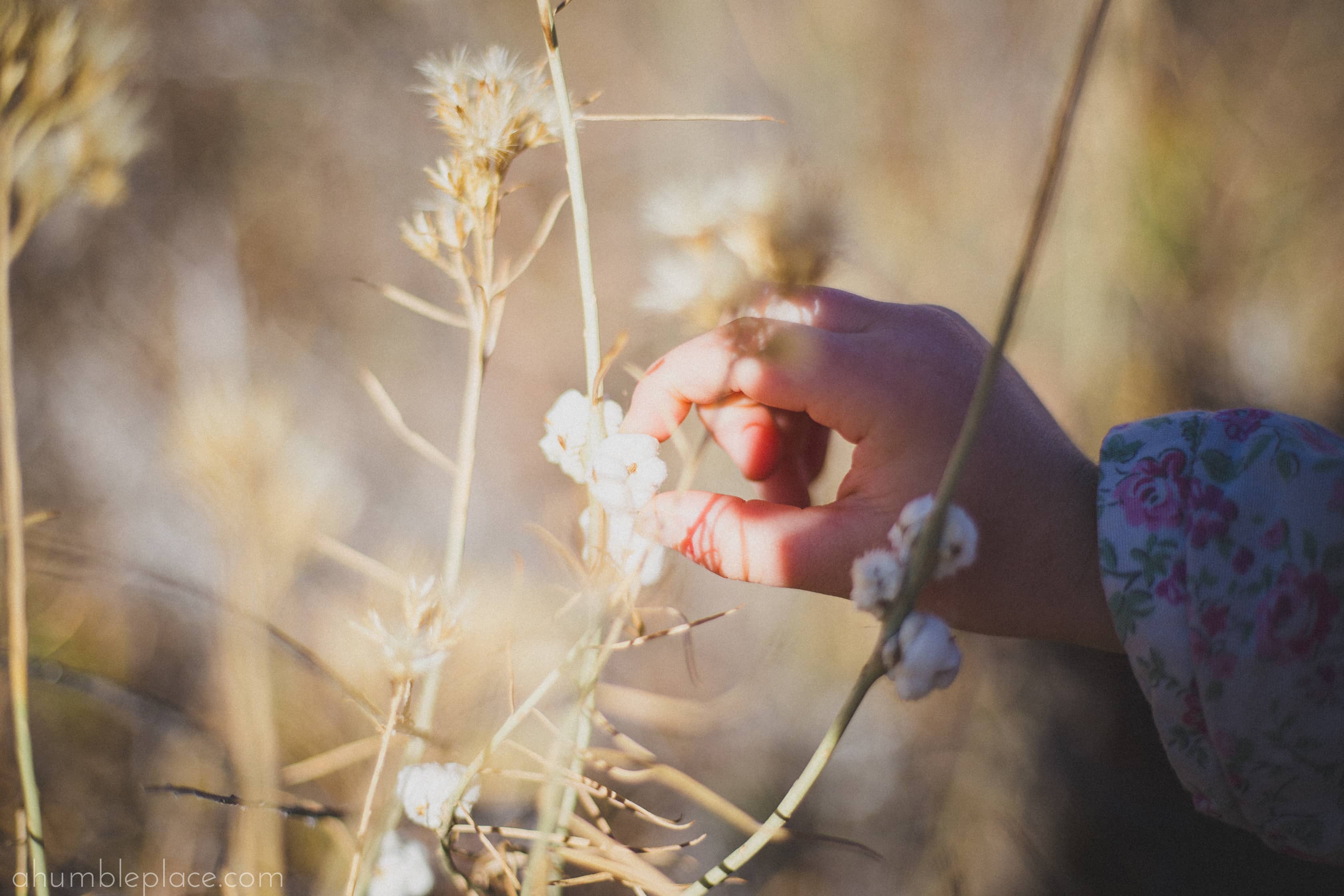 And here we are again at the end of another month and nearly the end of another year. The old adage that the days are long but the years are short feels especially true these days and I’m trying not to let myself sink into the desire for the end of the day to come faster every single day. It’s hard, though. E has been working a lot lately and is actually traveling for work right now and while I am very thankful that business is booming, as they say, I’m also getting pretty tired. And I think B and C are getting pretty sick of me. 🙂

What else can I say about this emotional roller coaster ride of a month? We celebrated our 12th anniversary on the 6th, complete with our annual trip to the golf course where our nuptials took place as well as consumption of a lovely cake. That was nice. The kids and I also started going back to our old nature hike spot as I just couldn’t find anything closer to our new home that compared. It’s about a half hour drive, so not too bad, but we’ll probably only do it once or twice a month. Still…it was so good to be back there.

And then, of course, there was the election (which I’m glad we had cake for – I needed it). I actually had a post all written up about my thoughts and feelings about it because I really, really, really, really struggled (and still am) with the outcome, but I decided not to drag politics here. It’s not as if I have anything profound or constructive to add to the national conversation anyway. Now I’m just finding comfort in reminding myself that Jesus didn’t come to earth to legislate or flip tables in the Roman courts. He came to earth to love.

Then Thanksgiving (and a subsequent week-long break from B’s kindergarten) and lots of work and life in general. It’s full, but I’m thankful for that.

In the end of November I’m into….

This month, I finished Be Frank With Me by Julia Claiborne Johnson. I liked this a lot. The characters, but especially Frank (of course), were colorful and had depth and I appreciated how Johnson didn’t let any one of them overwhelm the story. Frank was both understandably infuriating, but also incredibly lovable even to me, the reader, and I thought she did an excellent job of portraying how the other characters probably felt about him. The sense of empathy I felt for his plight, including his relationship with his mother but especially when he was faced with t-shirts and jeans, particularly drew me into the story. This also made me want to go out and buy my own son a wardrobe full of Buster Keaton suits and encourage his Sherlock side. 🙂

I also read The Summer Before the War by Helen Simonson. I really wanted to like this one as I liked Simonson’s other book Major Pettigrew’s Last Stand a lot. The premise behind the story was good and there were actually parts where I thought she was channeling Jane Austen (particularly any dialogue with Mr. Poot), but overall it just couldn’t hold my attention. If you like WWI stories, you may want to add this one to your to-read list, but otherwise I’d probably skip it.

And I finally finished The Picture of Dorian Gray by Oscar Wilde (or what I like to call “Lord Henry’s Gasbag Opinion About Everything in the Entire World”). This was a beast for me and I didn’t really enjoy it all that much which makes me feel so unrefined (again) and is part of the reason why it took me nearly a month to finish it. The descriptions of Dorian’s possessions were just so long and over-the-top (which is also why I don’t like Dickens and struggle with Tolkien) and any time Lord Henry was in a chapter, I really hoped he wouldn’t be part of the dialogue (no such luck). I was on such a roll with these classics that I thought this one would follow suit, but it didn’t. At all. I don’t think I’ll be reading more Wilde any time soon.

B and I also finished Mother West Wind’s Children by Thornton Burgess. He enjoys these books so much.

I’m currently reading The Divine Hours Volume Two by Phyllis Tickle, The Bookshop on the Corner by Jenny Colgan, A Little Princess by Frances Hodgson Burnett, School Education by Charlotte Mason, and Honey for a Child’s Heart by Gladys Hunt. I’m also reading Mother West Wind’s Animal Friends by Thornton Burgess with B.

Our TV viewing hasn’t changed much since last month, but I did sign up for a free Amazon Prime trial for the month of December (can’t be free 2-day shipping around the holidays), so I’m hoping to catch the new Julian Fellowes series: Dr. Thorne! Also, Poldark! I have a lot of watching to do in the next 30 days.

We managed to watch X-Men: Apocalypse on Thanksgiving night, but that was it. We have so many movies to watch yet never seem to have the energy at night to sit down and watch them. The new Star Wars movie is coming out next month and we’re hoping to have an actual, real date to go see that…but we’ll see.

Relaxing Essential Oil Blend from LuSa Organics. I got this as part of a baby shower present when C was born and I found it again after it getting lost in the move. It’s nice to use when I’m feeling a little overwhelmed with the kids. It may actually do nothing, but it smells nice!

Granite Ware Oval Roaster. This arrived earlier in the month in anticipation of Thanksgiving because my old setup was less than ideal (a roasting rack in a lasagna pan with parchment paper loosely tented around the bird) and I was always scrambling at the last second to find something else nearby we could buy. This year I was prepared! I was so glad to find this as it’s identical to the one my dad had when I was growing up, it wasn’t non-stick or aluminum, and the price point ($12) was perfect. Instead of having no pan juices to speak of, this year we had a wonderful amount of gravy to drown everything in.

Advent Candle Kit. It’s been our custom in recent years to roll our advent candles and this year was no different. After trying several different beeswax candle kits, I think we found a winner with this one!

Plan to Eat. They’re offering their once-per-year sale at 50% off a normal membership right now, which is when I always renew my account. Today is the last day!

The New Preschool Is Crushing Kids. “Preschool classrooms have become increasingly fraught spaces, with teachers cajoling their charges to finish their ‘work’ before they can go play. And yet, even as preschoolers are learning more pre-academic skills at earlier ages, I’ve heard many teachers say that they seem somehow—is it possible?—less inquisitive and less engaged than the kids of earlier generations. More children today seem to lack the language skills needed to retell a simple story or to use basic connecting words and prepositions. They can’t make a conceptual analogy between, say, the veins on a leaf and the veins in their own hands.”

Post-Election, Overwhelmed Facebook Users Unfriend, Cut Back. “the vast majority of emails — some of them nearing 1,000 words in length — read like testimonials to a therapist: I’m having a hard time focusing. I have questioned my friendships. I can’t stop scrolling. I’m exhausted. One email to NPR ended with: “It was good to get that off my chest.” People are turning off TVs (one even canceled her cable — mass media are not off the hook, either), deleting social apps from their phones, rationing time spent on Facebook and Twitter, and shrinking their digital friend lists.” I did actually deactivate my Facebook account not too long after the election and will probably keep it that way at least for a little while.

Following the way of Jesus: Statement from Presiding Bishop Michael Curry. “As the Episcopal branch of the Jesus Movement today, we Episcopalians are committed, as our Prayer Book teaches to honor the covenant and promises we made in Holy Baptism: To proclaim by word and example the Good News of God in Christ; To seek and serve Christ in all persons, loving our neighbor as ourselves; to strive for justice and peace among all people, and to respect the dignity of every human being….’The Episcopal Church Welcomes You,’ is not just a slogan, it’s who we seek to be and the witness we seek to make, following the way of Jesus.”

Who Moved The Norman Rockwell Painting In The Oval Office? “In times of great upheaval, Norman Rockwell’s art and the words and actions of Martin Luther King, Jr. not only continue to resonate, but they remind us of the values and lifted vision that have always made our country great, no matter what strife or turmoil we may have to face.

Thank you to whomever moved that painting. I got the message. Hopefully others will as well.

The painting was donated by Steven Spielberg to the White House collection in 1994. It has hung in the Oval Office during the last three administrations, watching over Presidents Clinton, Bush and Obama.

The question is: will it remain there now?”

November 2016 Meal Plan. I’ve switched to monthly meal planning recently which has been such a time-saver. December’s plan will be up soon!

Weeknight Real Food Recipe Collection (v 2.0). I revisited one of the most popular posts on my blog and made a new version of my recipe collection. These are our tried-and-true favorites that go into our regular rotation.

Charlotte Mason Picture Study Aid: Giotto. This was a lot of fun to put together and hopefully will be helpful to others using Ambleside Online or any other homeschooling curriculum. I hope to keep doing this going forward for all of the artists that AO puts up (at least while we’re using the curriculum 🙂 ) as well as offer a non-western/people-of-color/female option as well. I’m glad I’m finally getting to put my degree to use for something. 🙂 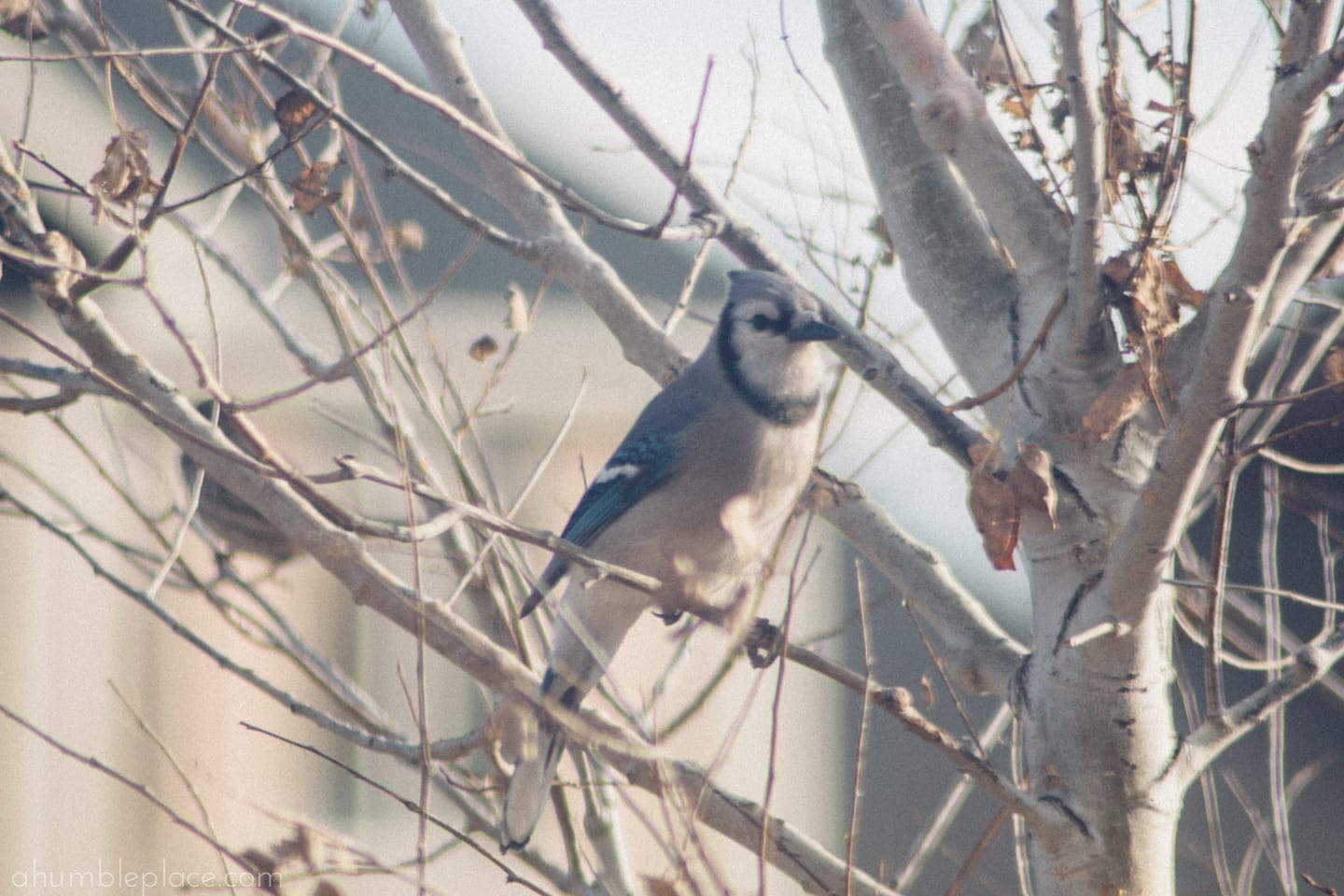 We have a few newcomers this month and I have a feeling we’ll see more as we get more snow. In October we saw blue jays for the first time (so nice to be getting some color), northern flickers (which are becoming another favorite of mine), magpies, collared-doves, house finches (of course), and what seems like millions upon millions of juncos all of a sudden. No more chickadees. 🙁 They’re such teases….